I built a book scanner!

My Better Half and I likes books - like them so much that we are running out of space in which to put them, not to mention the hardship of packing five books for a two week vacation. So we - well, mostly she - hatched a plan to get our book digitized and readable on either our ebook readers or on our tablets.

Digitizing books can be tricky though - the easy solution would be to hack the spines off and feed them through a document scanner, but there is two major issues with that plan: First, a fair number of our books are hard-to-impossible to get. Second, that's barbarism and just not something you do to books. A different approach was clearly needed.

A dedicated bookscanner that don't require you to mutilate your books are quite costly - if you want one of those you better be prepared to put a second mortgage on your home - but luckily there are dedicated tinkerers on the Internet that are more than willing to share their home-brewed designs. One such group is over at DIYbookscanner.org, who both have as a goal to put a book scanner in every hackerspace, and have come up with a simple, rugged and more or less fool proof design. One of the guys from there lives in Europe, and have started a business (DIYbookscanner.eu) selling kits with almost all the bits you'll need to build one.

As these things often do, it took longer from the box arrived until it was ready than I had planned for - part was down to timing (it arrived just before I had to be out of town for a few weeks) and part of it boils down to me not being quite as good with Linux as I had led myself to believe - more on that later.

The hardware for the kit is several kilograms of CNCed Baltic plywood - painted and ready to go - along with a small heap of screws and other odds and ends.The electronics consists of two Canon PowerShot A2200 (came with the kir), and one of my old Eee 701 running Ubuntu 12.04. On the Eee I run a sh-script which talks to the chdk-firmware in the cameras; it handles zooming in, setting the ISO, taking pictures, downloading to a SD card in the Eee and deleting the photos off the cameras. 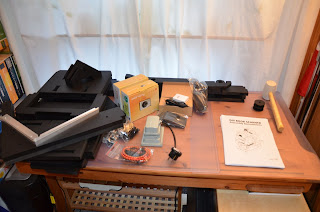 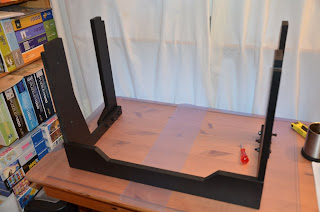 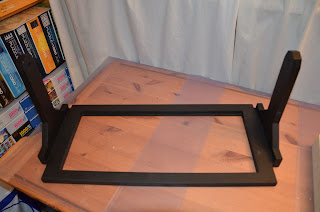 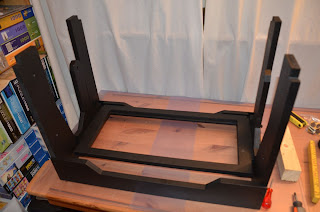 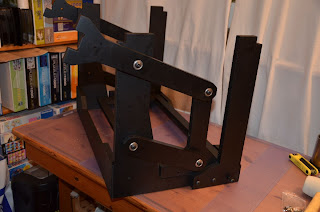 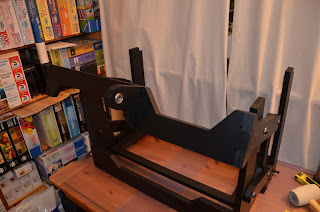 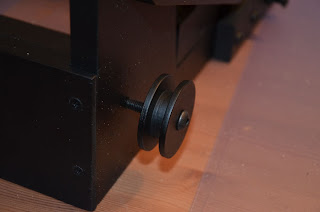 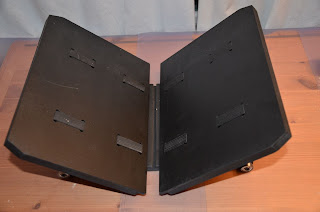 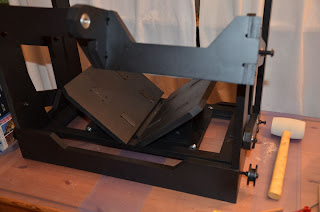 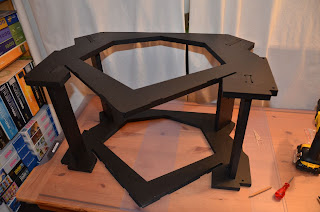 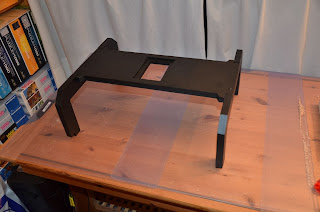 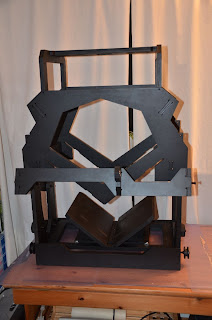 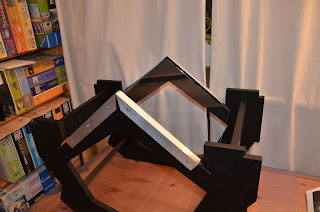 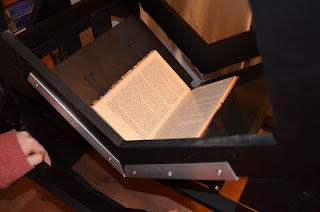 One thing that wasn't in the kit was a good handle - it came with one that I consider unsuitable for our use. However, a threaded rod, some nuts and washers, and a bike handlebar fixed that... 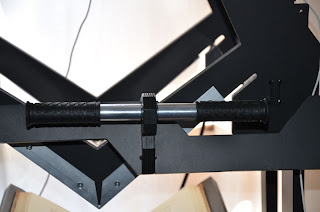 Then it was just a matter of mounting the light, the cameras and installing the software on the old Eee.

The Eee is an old little Linux Netbook, so the first hurdle was installing Ubunto 12.04 on it and then uninstalling pretty much every app that came with it. Once that was done I could download and run the various scripts that controls the cameras - only to find that they would not zoom in as they should.

Headscratching... lots of it, both for me and the guy I bought the kit from (a very likeable guy, and very, very helpful).

My Better Half and I was discussing buying a new computer just for scanning (either Linux or Windows - software exists for both), when i out of desperation decided to reorder two steps in the script. And while it shouldn't make no never-mind, it did fix it - the cameras zoomed in happily enough and snapped away. 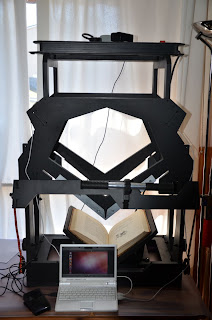 The Eee only handles the camera triggering script and the downloading from the camera. Post-processing is done on our desktops, using a very nice (and free) piece of software called ScanTailor, which is custom made for this sort of things. The output from ScanTailor can be OCRed to produce searchable text, and/or turned into a PDF or other format ebook. 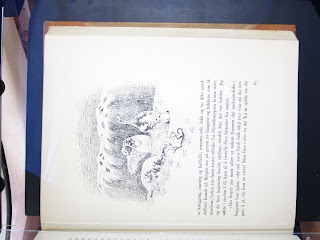 After processing (reduced size and quality for uploading): 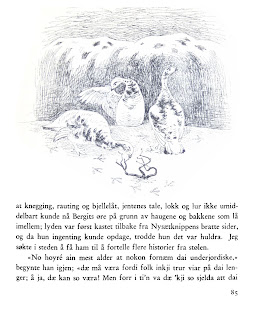 So there you have it - one homebuilt and working bookscanner!

PS: Some build these with a mechanical trigger instead of a software trigger, but the downside then is that you'll have to unmount the cameras each time.
Posted by WegianWarrior at 05:52 1 comment:

Or rather, learning the skills to describe an object in OpenSCAD.

If I can manage to describe an item - such as this simple baseplate for a DE razor - as a collection of cylinders, boxes and arches, it can in theory be made on a 3D printer or CNC machine. 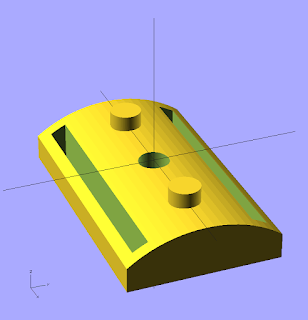 Posted by WegianWarrior at 21:38 No comments:

Not so optimistic no more

As I'm sure some of you have noted, EeeUser is down again. Last I got from the forum before it went belly up was that there is something not right about the database and/or server setup.

Wish I had the contact information for Ant - the Admin / Owner - so I could learn more what is going on, but I don't.

Oh well, life does go on... just as my Eee keeps soldiering on after several years of hard use, including a year in Africa.
Posted by WegianWarrior at 14:40 5 comments:


Despite my somewhat funny tagline in the header of my other blog, traditional wetshaving can be had on the cheap without sacrificing much in the way of quality. To prove it, here is one suggestion for a starter kit costing less than 10$ (if bought from my favorite Turkish wetshaving webshop), consisting of items I have tried and enjoyed myself:
Total cost as listed is a whooping 9.54$! In addition an newbie wetshaver might want a bowl from the kitchen for lathering in - unless s/he wants to make lather directly on the skin - and perhaps an after shave or balm. And off course some pointers on how to use a traditional DE razor, which can be had for free all over the Web - I recommend the friendly forum at The Shave Nook.

With a kit like this, and a steady hand, you can get about ten weeks worth of traditional wetshaving under your belt before you'll need to stock up on more supplies - and when you need more you'll need blades and perhaps more shaving cream. The razor and brush will last forever, if you take care of it.

So what you say? Is it worth a dollar a week to try traditional wetshaving?

Posted by WegianWarrior at 10:14 No comments:

EeeUser is back up and running - and Ant (the owner/admin) have given an explanation for why it has been down. I'm not going to pop any champagne, but I'm happy to see the place back up.
Posted by WegianWarrior at 20:04 6 comments:

Not new-new, but new to me... handy little pocket sized devices for crunching numbers, more than good enough for generations of engineers: slide rules! 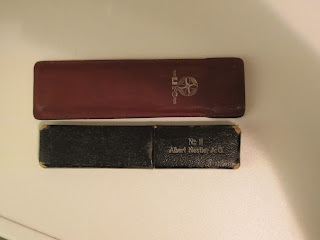 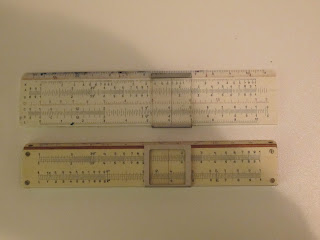 Super excited to have gotten these - not only are they cool and geeky, but got some history there as well. Top one can be used both as a regular slide rule and to calculate pitch for maritime propellers - how awesome is that?
Posted by WegianWarrior at 22:11 No comments: 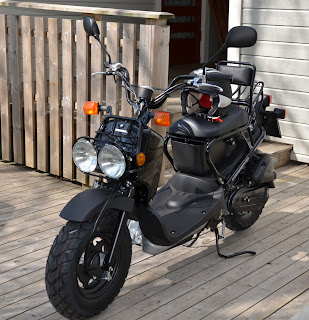 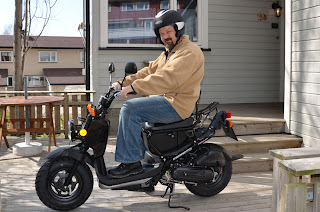 EeeUser is still pining for the fjords as it were - it's passed on, ceased to be expired and gone to meets it's maker. Or so I presume; while Ant (the owner of the site) may still bring it back, I'm not going to hold my breath and check daily no more. It would be a damn shame if it was gone forever - since it's was a goldmine of information - but I don't have access to the database nor do I have Ant's contact information.

In more happy news I have both found a very nice shaving forum online, and gotten to ride my new scooter back and forth to work all week. Life is good.
Posted by WegianWarrior at 20:38 4 comments: